Minorities in the Arkansas State Senate Before 1900

Bell was the only Black man serving in the 1891 and 1893 Arkansas Senate. He was also the last Black man to serve in the Arkansas Senate until 1973, when Senator Jerry D. Jewell was elected. Many historians believe that Senator Bell was a formerly enslaved person.

Logan was born in Ohio between 1850 and 1855. He served only one term in the senate during the 27th General Assembly from 1889 to 1890. He introduced three bills, but only one was signed into law. 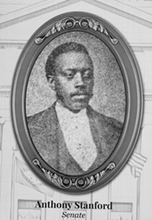 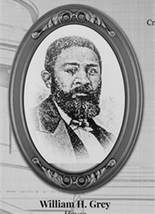 Grey was born December 22, 1829, in Washington, D.C. There is evidence that his father was Henry A. Wise, a white congressman and governor of Virginia from 1856 to 1860. He only freed three enslaved people during his life: Grey, his mother, and his sister. In 1863, Grey arrived in Helena, Arkansas, opened a grocery and bakery store and became active in Republican state politics. After serving as a member of the 1868 state constitutional convention, he ran and won a seat in the state House of Representatives.

There is little historical information available about Holland. He was born around 1844 in Ohio, and from the Arkansas Senate Journals for 1873, Holland introduced three bills. One of his bills was signed by the governor, and it was an act to amend the code of practice in civil cases.

Dawson was born in 1848 in Virginia. He obtained his education at Oberlin College, Ohio, and was the second Black man admitted to practice in Illinois in 1870. By December 1870, he moved to Pine Bluff to practice law. He served one term in the Arkansas Senate in 1873 for the 19th General Assembly and a Special Session in 1874 representing Jefferson County. He served with three other Black men: Senator James T. White, Senator Ruben B. White, and Senator Samuel Holland. In 1879, he was elected to the House of Representatives for one term.

He was a pastor of a church in Little Rock. He served with his brother, Senator James T. White, in 1873 in the 19th General Assembly and for the Arkansas Senate District 10, which covered Pulaski and White counties, which were next to each other in 1873. According to the Senate Journal, White served on the Education, Bank, and Memorial Senate Committees.

Mason was born in 1841 in Chicot County, Arkansas. His father was Elisha Worthington, a prominent landowner and the largest enslaver of Chicot County. Mason’s mother, whose name is unknown, was one of Worthington’s enslaved people. In 1868, he served as a delegate in the Arkansas Constitutional Convention and was elected to two terms in the Arkansas Senate in 1869 (17th General Assembly) and again in 1871 (18th General Assembly). He was the first Black man to serve in the Arkansas Senate and the first known Black man postmaster in the United States (1867-1871). He also served as a probate judge and county sheriff in Chicot County.
STOry, QUOTES, & picture sources